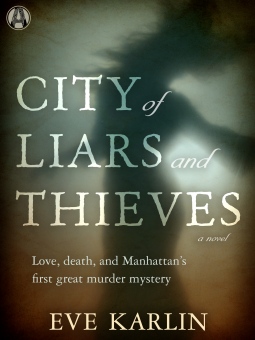 A crime that rocked a city. A case that stunned a nation. Based on the United Statesâ first recorded murder trial, Eve Karlinâs spellbinding debut novel re-creates early nineteenth-century New York City, where a love affair ends in a brutal murder and a conspiracy involving Alexander Hamilton and Aaron Burr erupts in shattering violence.

It is high time to tell the truth. Time for justice. . . . How she was murdered and why she haunts me. It is not only Elma âs story, it âs mine.

On the bustling docks of the Hudson River, Catherine Ring waits with her husband and children for the ship carrying her cousin, Elma Sands. Their Greenwich Street boardinghouse becomes a haven for Elma, who has at last escaped the stifling confines of her small hometown and the shameful circumstances of her birth. But in the summer of 1799, Manhattan remains a teeming cesspool of stagnant swamps and polluted rivers. The city is desperate for clean water as fires wreak devastation and the death toll from yellow fever surges.

Political tensions are rising, too. Itâs an election year, and Alexander Hamilton is hungry for power. So is his rival, Aaron Burr, who has announced the formation of the Manhattan Water Company. But their private struggle becomes very public when the body of Elma Sands is found at the bottom of a city well built by Burrâs company.

Resolved to see justice done, Catherine becomes both witness and avenger. She soon finds, however, that the shocking truth behind this trial has nothing to do with guilt or innocence.

“Gracefully written with exquisitely drawn, convincing characters, this is one of those rare historical novels that hit not one false note. City of Liars and Thieves offers a compelling tale of romance and intrigue, set in a fascinating era of Manhattan’s tumultuous past.”—Leslie Wells, bestselling author of Come Dancing “City of Liars and Thieves is both a historical murder mystery and the tragic story of a vulnerable woman snared in the ambition of New York’s most powerful men. Eve Karlin captivates at every step with a nuanced narrator, right-here-and-now details, and steadily mounting dread. But it’s the twist ending that leaves us gasping, like the narrator, with the vertigo of disillusionment and a craving for justice.”—Maia Chance, author of Snow White Red-Handed